Drones for Crowd Management – Are They Really Effective?

Now here’s an example. There are about 2.2 million police jobs available in India and at least 25% of these positions are still vacant. In 2018, the United Nations Office on Drugs and Crime (UNODC) reported that India has 138 policemen for every 100,000 citizens (it was 129 in 2013). This is the 5th lowest among 71 countries. This isn’t so bad when you consider the smaller pockets in the country where law enforcement is an active requirement, but what happens at mass gatherings?

If this was perceived as a breakdown in security, it is no longer so. As far as keeping the law is concerned, there may still be some gaps, but at least one major challenge now has a new solution because of drone technology. Of course, the biggest and most obvious challenge for any understaffed police force is crowd management and monitoring.

Crowd Control, The Traditional Way
One challenge that every police force faces from time to time is the unexpected surge of people in a crowd. And it takes a trained task force to identify a potential escalation even before it happens. That requires effective crowd management and monitoring, which may not always be feasible.

Several times a year, it is fairly routine to see crowds around a burning Ravan effigy, people lining the roads during Diwali or Holi, or even people skeltering for cover when it rains during a cricket match. However, the question is, when does a threat come into the picture, and who is going to spot it? How can we be effective about crowd monitoring?

In 2013, Narendra Modi was on his campaign rally in Mumbai where trained personnel from Israel were brought in to spot suspicious activity in the crowd. The security was designed to manage a crowd, and even prevent a bomb threat. To their naked eye, they spotted two suspicious people who turned out to be pick-pocketers. It makes your heart skip a beat when you think about how you might need internationally trained experts to neutralize a potential threat in your country. So, would 138 policemen for every 100,000 Indians ever be sufficient to manage a crowd?

You often hear this unpopular narrative about police personnel: “They’re always suspicious” or “They’re too hard hearted”. The value of your life weighs more than heavily on their shoulders and this might be an occupational side effect. Imagine how agile one person needs to be in order to pay attention to every face in a crowd, closely index them, make a snap decision and run in any direction when required? What is the one thing that can enable them in their job and allow them to serve more people?

The Real and Most Effective Solution: Drones for Crowd Management

Unmanned Aerial Vehicles (UAV) can easily solve the problem of crowd management and monitoring. Drone technology enables us to observe, analyze and predict what might almost certainly happen on the ground. With computer vision and artificial intelligence, you can clearly see things that even the most trained eye can miss on-ground.

Facial recognition, assessing a subject’s moods and motives, thermal imaging during night-time, movement patterns in a crowd (and those that don’t conform to the general pattern in the crowd), are only some of the few things that a UAV could do to strengthen law enforcement.

Imagine a crowd like that of the Kumbh Mela where there might not be sufficient ground personnel to monitor the crowd. An eye in the sky, a.k.a drones, could prevent untoward incidents from happening even when there might not be any clear sign boards or people with reflective vests in sight. This is precisely what was deployed for the Amarnath Yatra in 2017.

Keeping in mind the security threat in Jammu and Kashmir, the 40 day Amarnath Yatra that was flagged off from the Yatri Niwas Camp had ‘Netra’, a drone that further strengthened the CRPF jawaans in doing their job.

In a sporting event or a religious gathering, if you are a ground personnel in-charge of monitoring the crowd, how far could you see? When you’re surrounded by thousands of people in a small space, you will probably not even recognise the direction you walked in from.

However, here is what a drone can do to manage a crowd- it can tell the difference between two people walking side by side, and two people facing each other with their arms locked in a fight. If people’s hands are up in the air in prayer, the camera will spot unnatural arm movements, like something being thrown. 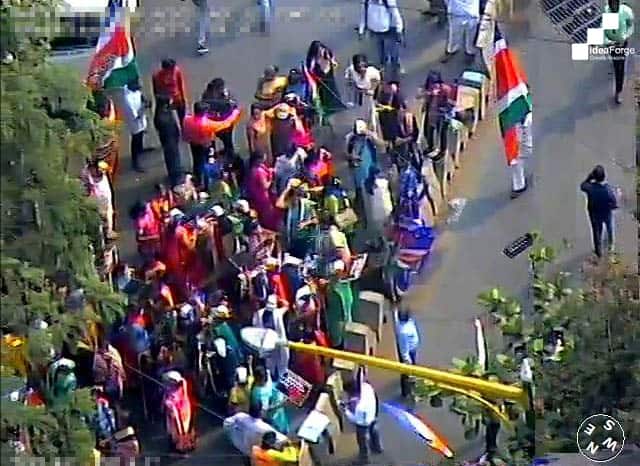 The above image was captured from ‘NETRA UAV’ a drone that was deployed for crowd monitoring during an election rally. For the human eye, this image might not mean much, but the drone looks at it through a completely different filter.

Consider this is how the drone’s camera is analyzing people’s presence and their movements:

A drone won’t capture one instance at a time like a human policeman would. A drone can observe and analyse large sections of the crowd at once, making crowd management much easier and effective.

There is no substitute for human intelligence. A drone would still interpret Muharram ceremonies as “something wrong”. On-ground forces are valuable because they are the only appropriate interface between civilians and the law. Drones, however, can multiply their potential and impact to unimaginable levels.

Possibilities Go Above and Beyond

The question to ask is- what is possible when a drone is watching a crowd for you from above?

Preventive security is only the first application for crowd monitoring and management. Let’s look at what can come of it:

The big picture emerges when the drone can soar up a few hundred meters and make everything in a half kilometer radius visible. It provides a vantage point where none exists. This can happen on any terrain and under any circumstances.

The face value does not adequately capture the potential of drone technology. Can a drone read a crowd for you? Yes. But it needn’t be restricted to security applications alone. What if the drone could read the varying moods of a crowd based on what is being said in a speech (for instance). You could potentially predict whether a candidate is likely to win that election. It could tell you if something that was said in the speech was received with extraordinary enthusiasm or not. It would provide intelligence on what makes people tick as a crowd.

Security, surveillance, and individual attention can all be under control with just one device. Want to see if everything is going as planned? Is there any suspicious activity to zoom in on and verify? Are women safe? Is someone injured or has a child been separated from an adult? It’s all right there in front of you, in real-time, with this outstanding yet realistic technology.

What is truly remarkable is how one piece of technology can enhance our ability to serve people at a much higher level. For the police and security forces, it’s a direct fulfillment of their commitment to be highly aware of the people they’re looking after. And then there are other entities like the organizers of large events, outdoor adventure guides, tourism facilitators (think ‘Mysore Dasara’), and public speakers who could benefit immensely by observing, acknowledging and serving individuals in a crowd. No participant would go unnoticed or left behind. If someone has a concern that a service provider could address, it would be spotted in real-time and whatever is necessary would be delivered immediately.

As a service provider of any kind, your scope to serve increases dramatically along with your ability to do so.

AI-powered drones are a step forward in ensuring that people are free and at ease about being and belonging with their communities outdoors.