DGCA announces India’s drone policy. We decode it for you.

India’s Director General of Civil Aviation (DGCA) has released the long awaited drone policy for their operation by Civilians and Indian companies. We have received a lot of questions from our customers regarding continued operation of their Unmanned Aerial Vehicles (UAVs)/drones now that the policy is officially announced.

One important thing to note is that the regulations discussed in this article are applicable for all consumer drones, including toys and prototypes, and also to all drones used by Homeland Security and Civil industries. These regulations do not apply to the Ministry of Defence, and therefore all drones for defence and military purposes fall outside their purview.

Before we dive deeper into the weight categories, let’s talk about common permission for all civil drones in India. The manufacturer or importer of a drone needs to make sure that the product’s communication frequency (which is usually the same frequency used by a home’s WiFi) has received a clearance to operate from the Department of Telecom’s (DoT’s) Wireless Planning Commission (WPC), referred to as an Equipment Type Approval (ETA). While you as an operator do not have to approach the WPC to get a clearance, the manufacturer of your drone has to.

If your drone does not have an ETA, send in a request to the manufacturer of your drone, as this is going to stop any legal flying you are going to do, regardless of which category your drone falls under.

There are four major licenses that you would need to acquire in order to operate drones in India; the UIN (Unique Identification Number), the UAOP (Unmanned Aircraft Operating Permit), the OAN (Ownership Acknowledgment Number), and the DAN (Drone Identification Number). We’ll discuss these one by one, and in the order that they were enacted by the DGCA.

For the categorisation, the DGCA breaks down the different categories based on their total weight (including cameras and all sensors) as follows:

If your drone is in the Nano category, you can fly unrestricted below 15 meters. This category is exempt from procuring both a Unique Identification Number (similar to a license plate on a car) and an Unmanned Aircraft Operating Permit (similar to a driver’s license). 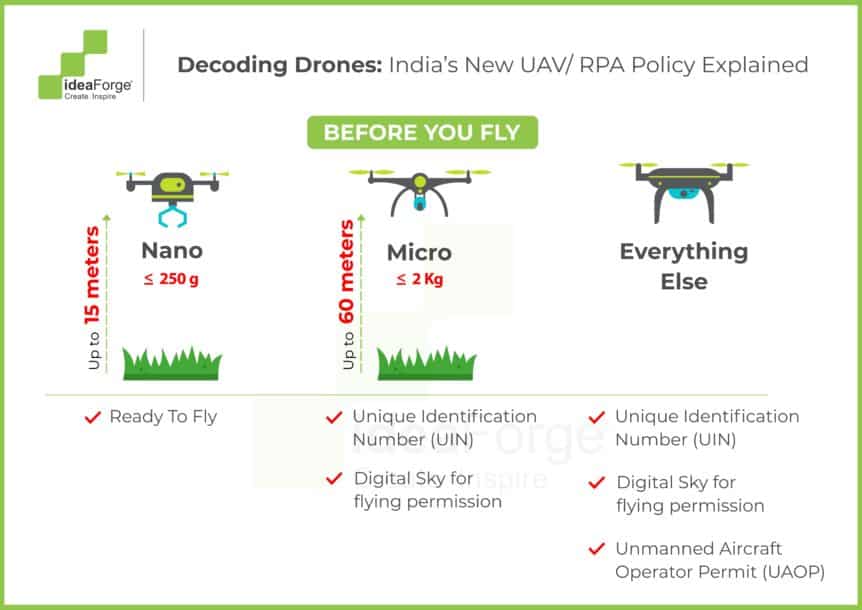 The permissions required start to scale up past this weight limit.

Once your drone receives the UIN, you need to mount this on a fire-resistant plate on your drone, similar to a car’s license plate. 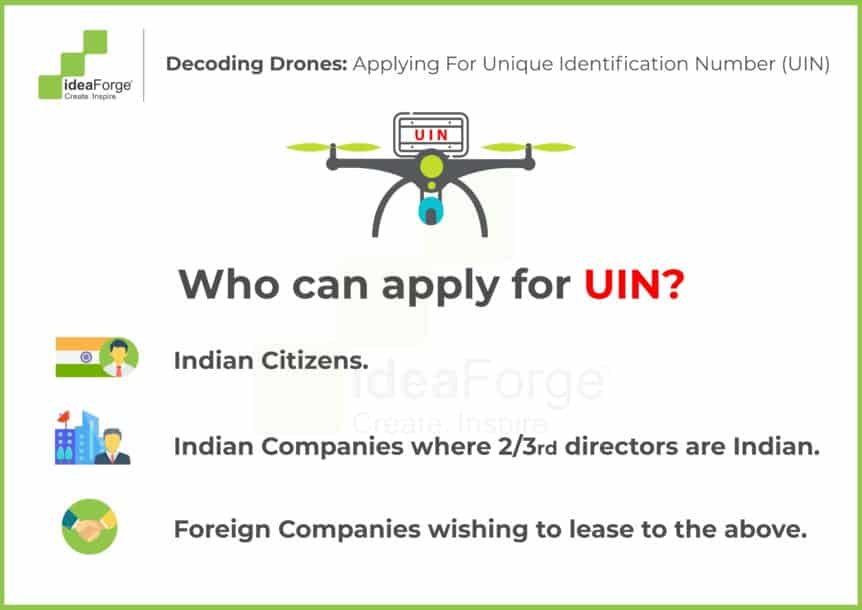 For drones in the Small categories and up, in addition to getting a Unique Identification Number, you will also need to procure a Unmanned Aircraft Operator Permit (UAOP), which is basically a pilot’s license.

To apply for a UAOP, you will need:

For a while these licenses were sufficient for maintaining order in Indian airspace. But as drones became more and more accessible, there were a lot more drones in the air than the DGCA had anticipated. Seeing as there were several people that were not in compliance with these regulations, the Director General of Civil Aviation (DGCA) called for a voluntary disclosure of non-compliant drones flying in India. The submission of this information was to be done through an online portal. First, the drone owner must submit their own information based on which they will be issued an Ownership Acknowledgment Number (OAN) which enables him or her to own drones. Then, they must submit their drone’s information which will enable them to get a Drone Acknowledgment Number (DAN), which legitimizes the ownership of a particular drone by that person.

The deadline for registration to obtain an OAN and DAN was 31st January, 2020, and the DGCA clarified that all unmanned aircrafts need to be registered, be they models, toys, prototypes etc.

Even if a person does not have a UAOP or a UIN for their drones, they may apply for the OAN and DAN. However, possession of the OAN and DAN alone does not confer the right to operate the drone in India. For operations, the UIN and UAOP remain mandatory.

Ownership of a drone in India without a valid OAN and DAN shall be met with penal action as per applicable laws, as is operation of a drone without a UAOP and UIN.

Now that we’ve covered the licenses for you and your drone, let’s move on to the permissins required for flying.

To ensure the safe and legal operation of your drone, the DGCA has the following guidelines:

Once you have completed the above, get a permission slip for the flight from the Digital Sky Platform*. Once the slip has been received, the Drone’s autopilot should now be active and ready to perform the flight.

Recently however, a much more strict regulation has also been added to these existing guidelines known as the NPNT (No Permission, No Take-off). The ‘NPNT’ is a software, where all drone pilots must create their account and share their own details as well as their drones’ details. It then checks whether an RPA (Remotely Piloted Aircraft) and its pilot have the required permissions to operate in Indian airspace as per the Ministry of Civil Aviation, and accordingly authorises each flight. These permissions of course include checking whether all relevant licenses are in order or not, but also checks the envelope of airspace that the pilot intends to conduct their flights in.

Airspace in India is divided into Green, Yellow, and Red zones; Green zones signify unrestricted airspaces, Yellow zones require Air Defence Clearance or Air Traffic Control clearance, and Red zones are restricted airspaces. These are around facilities like airports, military areas, international borders etc. and if mid-flight, a drone is flown into or too close to a Red Zone, then the NPNT software will compel the drone to return-to-home (RTH). So many licenses and regulations may seem stifling for drone flight in the country, but in a country as vast as ours, these measures are necessary right now to maintain security and peace.

However, in light of the COVID-19 pandemic, the DGCA recognizes that there are several ways in which drones can be utilized in these times. So to facilitate these operations, they have introduced the GARUD Program, which is basically a conditional exemption for Government entities to bypass some of the several regulations in place. This is provided in order to fast-track the use of drones and their introduction in the work-forces, in order to combat the coronavirus, and not waste any time in acquiring different licenses and ensuring that all guidelines are met completely. There are several conditions that the GARUD Program entails, and you can read about them in detail on the Ministry of Civil Aviation website.

The drone industry is an exciting one with a myriad of applications in the Civil domain. With the policy finally in place, we can now look forward to safe and legal operations.

For any further clarifications, write to us at info@ideaforge.co.in