Small and micro drones are now playing an important role in the fight against Covid-19. Drones from companies like ideaForge are helping local authorities enforce strict social distancing protocols in hotspots.

“We have one of the most powerful weapons against this virus. We’re not defenceless. And that weapon was the social distance and is the social distancing” – Dr Robert R. Redfield, Director, Centers for Disease Control and Prevention, United States.

South Korea has been, up until now, far more successful in containing the rapid coronavirus spread. They had, at one point, most cases of Covid-19 outside of China.

“Social distancing played a role in restraining domestic group transmissions by some 70% during the first 11 days compared with the last 11 days before it took effect” – Park Neung-hoo, Health Minister, South Korea. “If the number goes down to 50 or lower, stable treatment of the patients including the critically ill will be possible without much pressure on the system”, Park summarized.

Now, they have flattened the virus curve. They are consistently reporting less than 50 cases in a day.

Ground reality of Social distancing during the lockdown

When this article was written, India had identified 170 hotspots. Out of these, 123 had large outbreaks and 47 had clusters of cases. The hotspots are demarcated in red, orange and green based on the active cases within them. If a red zone hotspot doesn’t show a case for 14 days, it’ll be recategorized as an orange zone. Another 14 days (total 28 days) it will be pushed to be a green zone.

This transition is only possible when people follow strict social distancing norms.

Police and on-ground emergency services are constantly guiding citizens to not gather around shops, in the streets or even on rooftops. It’s critical that we move from Red to Green (zone) within 28 days. However, there are cases of lockdown violations and people open flouting social distancing norms keep repeating. This is stretching the work for the already overworked on-ground officers.

The police and local authorities are faced with some operational issues: 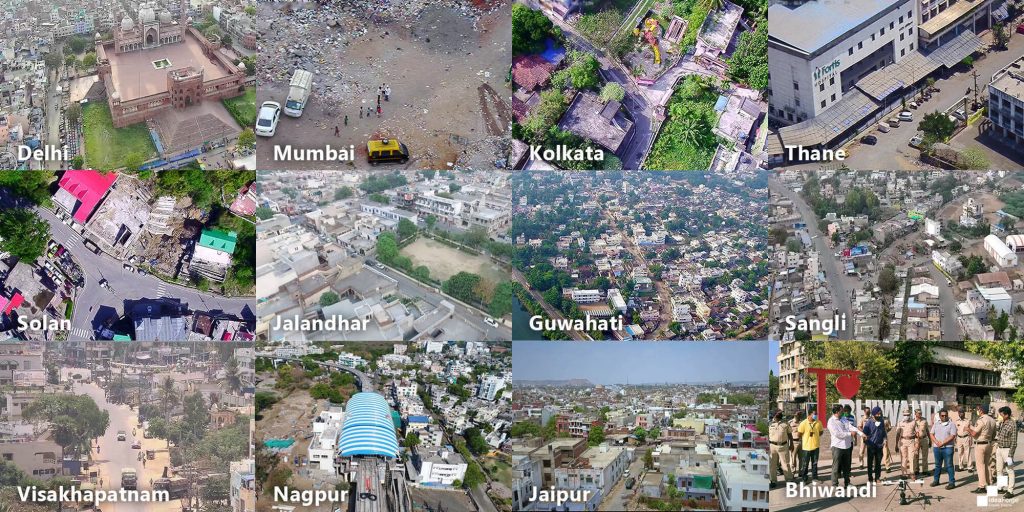 These drones boast of high-endurance. This helps them fly faster, better and longer even in tough environmental conditions. This brings the necessary consistency, rigidity and agility in the fight for social distancing.

This is how drones helped Mumbai, Delhi, Sangli and Guwahati police.

Beyond the numbers, the drones helped:

We have seen that social distancing is critical in breaking the cycle of the coronavirus spread. We have also seen that drones are helping local police officers and municipal corporations to boost the efficiency and visual reach of their resources; improve social-distancing enforcement; help sustain the safety of on-ground forces (especially in hotspots).

Let’s look at how these things unfold in the streets.

Drones are being used in many cases to help ensure strict social distancing. This social distancing would, gradually, help us flatten the curve of Covid-19 spread in the country. This would help contain the virus and still open up the economy in parts.

If you want to get back to normalcy (as much it would be in the current scenario), the only solution at hand is social-distancing. Practice it, propagate it and inculcate it. We have been (mostly) disciplined up to this point. Let’s make the rest of this lockdown, the homestretch.