Drones for Police Forces: The Silent Saviours of the City

Drones are the latest law-enablers for large and small cities alike. “Drones for the police forces”, is a recurring sentiment as squads right from the NYPD, the Bay Area, to police forces closer home where Mumbai Police uses them for law enforcement (3).

For more context to the depth of technology adoption within police forces, let’s look at a recent study by Markets and Markets. This study cites that the market for software tools within law enforcement agencies (globally) would increase at 9.3% CAGR up to 2023 to reach $18.13 billion (from $10 billion in 2010).

Before moving ahead, let’s look at why a strong police force in a city is so important.

Police are among the first respondents to any emergency or disaster zone across the city. They put themselves on the front lines every day to direct and enforce the law for millions in vibrant and dynamic cities. They check and deter criminal activities and enforce the vision of justice for sustained societal processes.

There are situations, as we know, where citizens point fingers at some inefficiencies. Other than the more critical ones, the major section of inefficiencies arises from an overworked, over-stretched and ill-equipped police force. Squadrons of a few thousand must ensure constant beat patrols for consistent flow of city life, across seasons and occasions.

Herein lies the biggest relief factor for the police forces in terms of drones.

Field or beat patrols (cyclical patrolling of designated areas) is a necessity. However, due to resource restrictions, police forces are often spread-out to thin for effective surveillance and crime-detection or prevention. 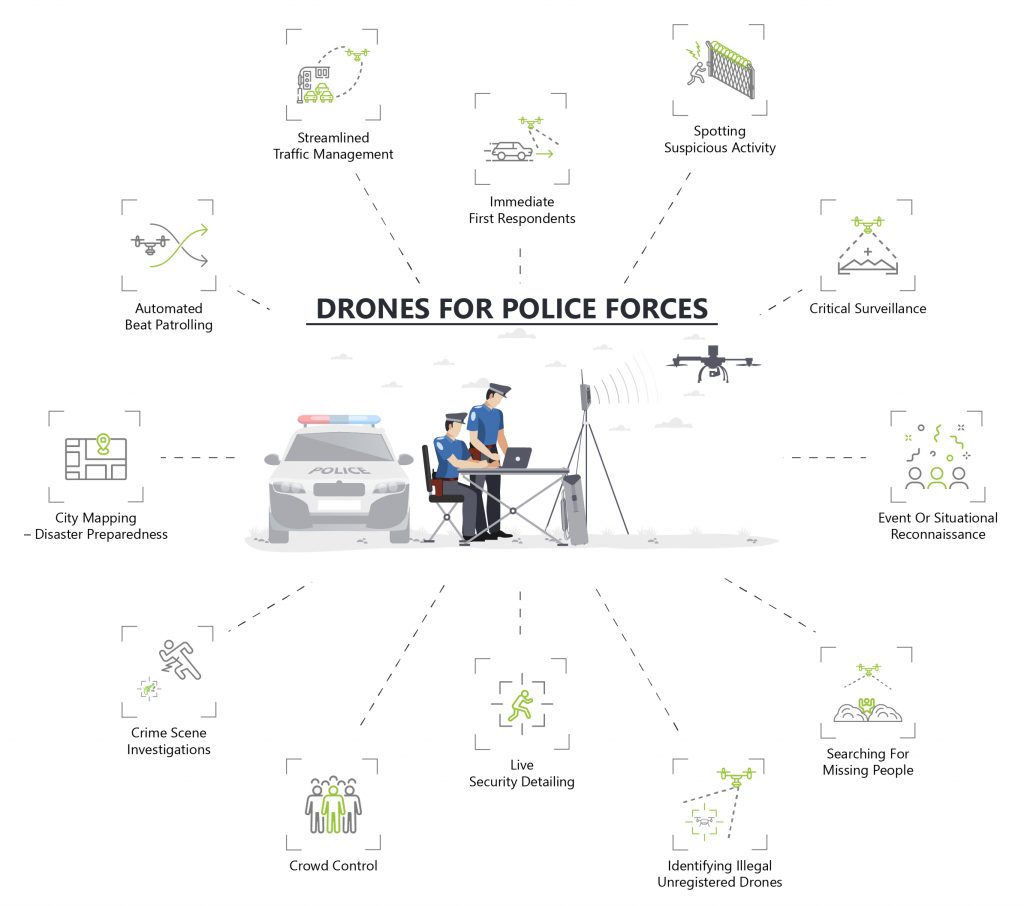 ideaForge drones fly longer, faster and better. Moreover, they are extremely easy to handle and can be deployed right from a bag, anywhere in the city. These drones for police forces are equipped with high-end payloads like:

ideaForge’s NETRA Pro UAV can carry dual payloads which means that it can generate double the insights in a single flight. High endurance and durability mean that they these drones can reach the hardest places through the toughest conditions, consistently. That’s what comes from a decade of military-grade precision development.

A couple of hundred police officers are often, and repeatedly, tasked with patrolling hundreds of city blocks tirelessly. There must be situations where lethargy or tiredness results in oversight and errors.

Here, drones can be deployed to effectively patrol controlled areas regularly with crystal clear live visuals over a totally secure and encrypted network. Drones for police forces can effectively increase the patrolled area by 4x to 6x for each requisitioned police officer. This has immense cost savings in law enforcement. To top it off, the police are sharper and better prepared to handle criminal intent and activities. Backed with live patrolling, they can instantly deploy troops to activity spots instantly.

Traffic in any vibrant city is an almost live organism with a pulse felt across kilometres. Police forces must direct and manage key traffic zones to eliminate potential or eventual bottlenecks. It’s a thankless and tiring ordeal.

Drones can be deployed quickly along the long highway or know bottleneck zones for live traffic updates. They beam back exact details about vehicle clogs in multiple lanes. The birds-eye-view of drones helps spot the exact inflection point in the traffic, perhaps a mistimed turn by a truck or erroneous vehicle blocking further traffic. The police can pinpoint and act on these exact occurrences to solve the traffic puzzle in a timely manner.

As it’s pointed out earlier, police forces are among the first respondents across different emergencies across the city. Ranging from crime-related to even domestic fires, police are on-site in an instant.

Drones can act as the frontline for these police front liners. They can give the important intel about evacuation points or potential danger zones which enable the police to better control the situation.

The police forces have an underlined duty to respond quickly to any eventuality. A big-enabler for these quick responses is strong and latest on-ground intel from each and every city block. This is much more relevant when preparing for potential terror alerts, environmental warnings, potentially disruptive events, etc.

Drones give their most benefit here. They help create detailed 3d orthomosaic maps of the entire city blocks, districts, zones, etc. within days. With such efficient surveying and mapping of all city zones, the police can create diversions, plan stations and rendezvous points, and overall direct the safety and security of all citizens.

Drones are a technological marvel and they are utilized in the right zone. Companies like ideaForge lead with the best licensed and field-ready drones for enterprise and government use, with the highest in-class endurance. This means that the drones with the police can quickly and effectively spot illegal drone usage (perhaps in no-fly zones) and put a stop to them immediately before any unforeseen situation.

Drones for police forces are one of the most versatile tools for law enforcement across multiple global cities. They enable high-security and efficiency by equipping the police with live and actionable insights. The better and swifter police forces would be, the more crime-free cities would be. And that’s a core ideaForge endeavour.